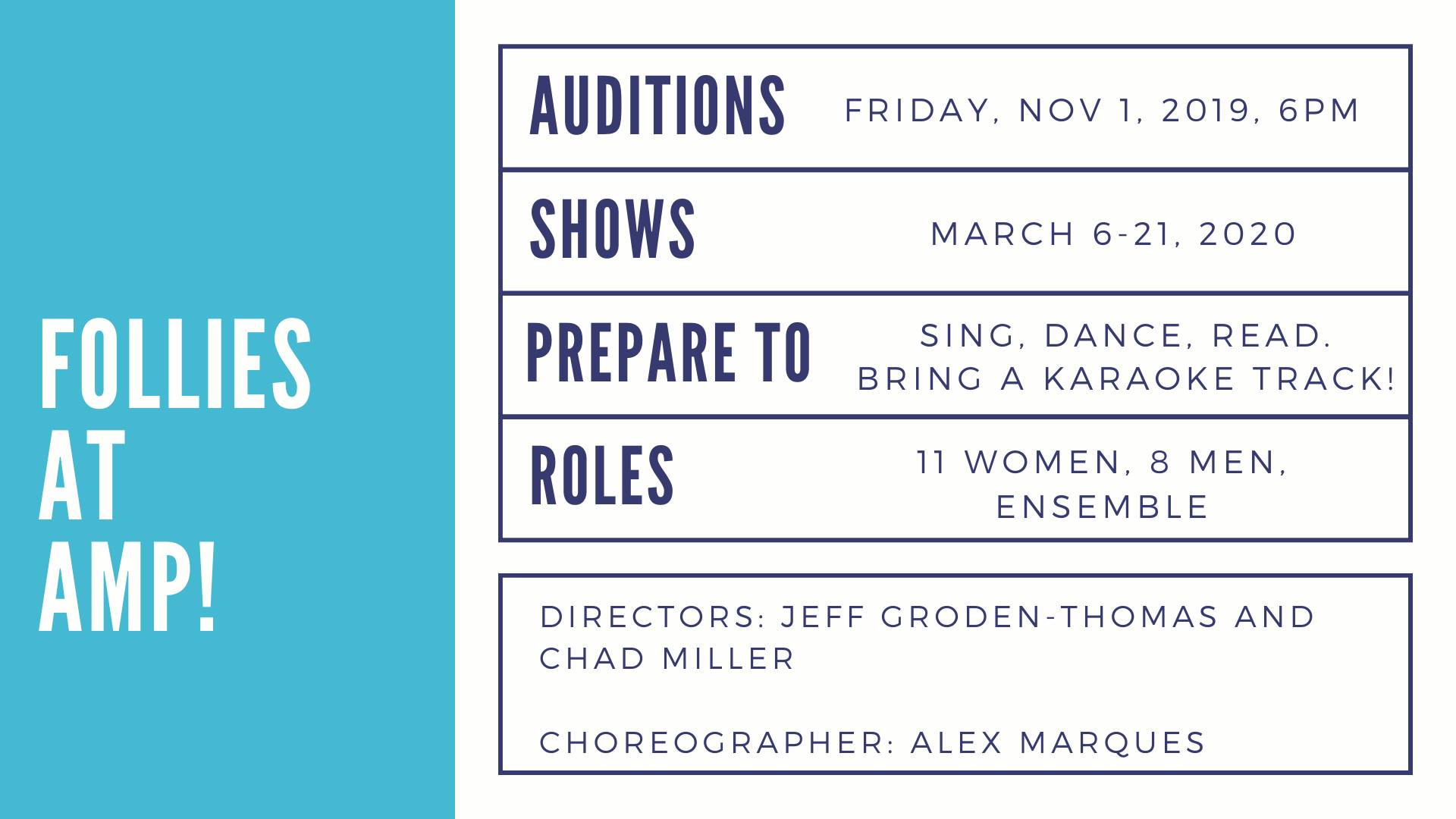 Come audition for Follies! Be prepared to dance and read provided passages from the show.

Additionally, sing one minute from a song. It may be from the show or from another musical. Please provide your own soundtrack as there will not be a pianist at the audition.
Access to a Bluetooth amplifier will be available. A capella singing is highly discouraged!

The character list is divided into current day characters and versions of their former selves.

The “current day” characters’ ages generally range from the 50s to the 70s. The “young version” characters can range from late teens to 30s. The actors’ actual ages are less important than matching with a character, so those in their 40s may be cast either way.

Sally Plummer – F3-G5 – Bubbly, still remarkably like the girl she was 30 years ago, a former Follies Girl, she married a man she didn’t love. Needy and delusional at times. (requires some
dance).

Young Sally – C4-G5 – Perhaps the most similar to her adult self of the foursome. Bubbly, adventurous. Wants it all but may not have the drive to wait. (requires some dance)

Phyllis Stone – F3-E5 – Stylish and intelligent. A woman who made her husband her life, the journey has hardened her and replaced traces of life with cold sophistication and poise. (requires dance)

Young Phyllis – B3-E5 – Energetic and naïve Follies girl. Slightly sad and homesick. With all the drive and none of the sophistication of her older self. (requires some dance)

Buddy Plummer – C4-F5 – Charismatic but sad man that has been hiding behind his smile for years. Stuck in a broken marriage and has had multiple affairs. (requires some choreography)

Young Buddy – C4-G5 – Charismatic and lively. A man that knows how to have fun. Loves Sally blindly and want to give her the world.

Ben Stone – A3 -F5 – Distinguished, successful, authoritative. Am man bent on success from a young age who has achieved and now realizes the toll it had on personal relationships.

Carlotta – E3-B4 – One-time movie star. The kind of woman who has seen everything and is proud to be standing where she is. (some dance)

Stella Deems – E3-F5 – Half of a performing duo with her husband. Loves life and has led a good one. (some dance)

Max Deems – Half of performing duo with wife Stella. Has a sense of rhythm and moves with special lightness.

Hattie Walker- G3-B4 – Tough, no-nonsense lady. A former knockout follies girl from the early years of the shows. She married often and likes the bad boy. (Some Dance)

Solange La Fitte – A3-G5 – French fashionista. Very much still alive and enjoying it. She’s a perfume creator and seller. Has travelled the world, but loves Paris above all. (some dance)

Young Heidi -D4-A5 – Queenly, but not yet as rich and well connected. (strong operettic style voice)

Dimitri Weissman – Acerbic, vital, energetic man. Staged the Follies every year between the two wars. Made stars of any girl he wanted from the legions who threw themselves at him. (not
a singing role)

Roscoe – D4-A5 – Showman with majestic tenor voice who introduces the Follies Girls as if no time has passed and they are still beautiful young girls of years ago.

Emily Whitman – B3-D5 – Married to Theodore They teach dance together. (some dance)

Theodore Whitman – B2-D4 – Married to Emily. They teach dance together. (some dance)

Ensemble – We will also cast to fill the roles of the young versions of several of the female characters which will include extensive dancing, and some singing. Males will be needed for
some small spoken parts and some dancing and singing.

Sponsor a show your family loves – or one that matches your company’s values.
END_OF_DOCUMENT_TOKEN_TO_BE_REPLACED