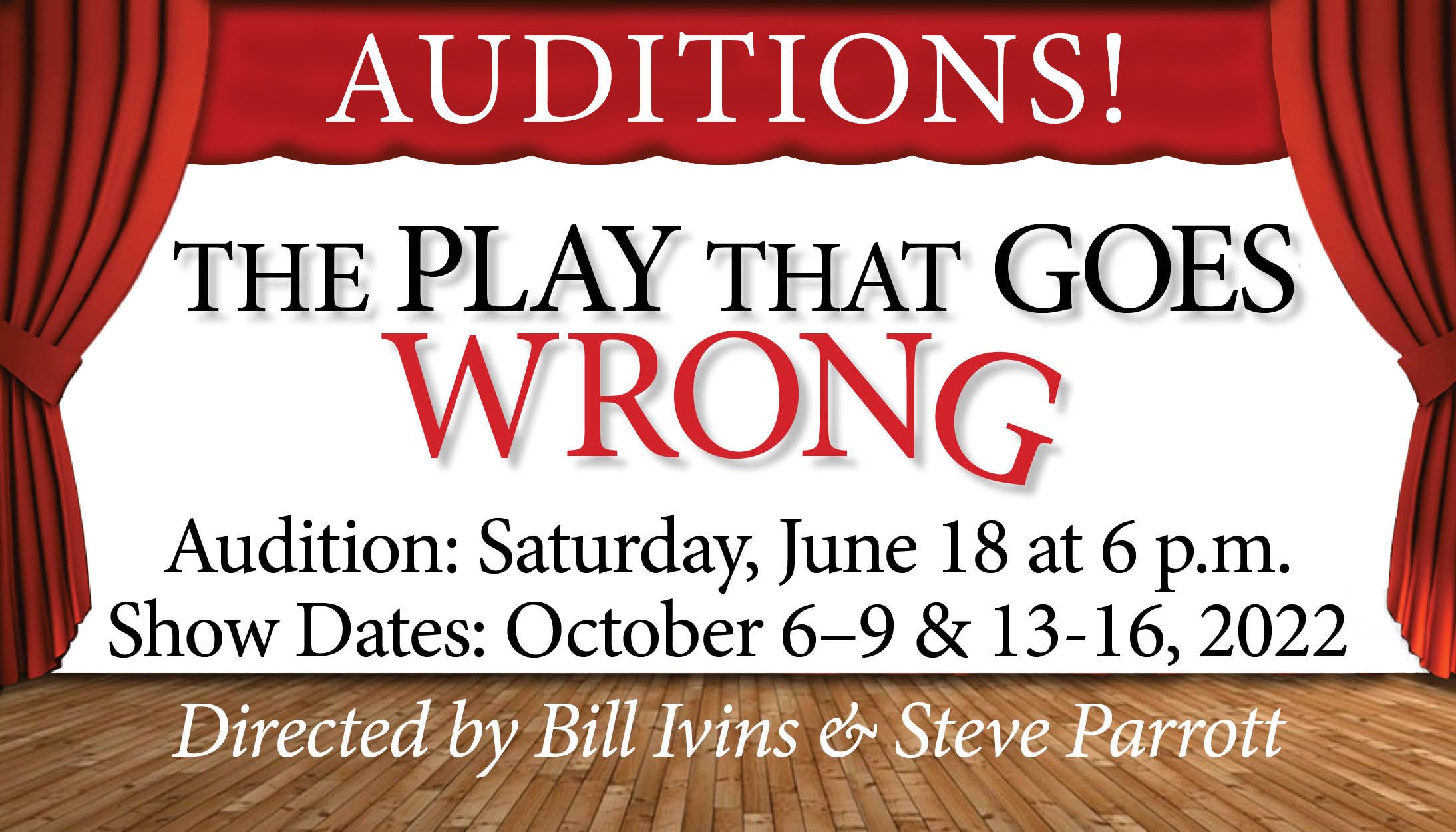 Auditions: The Play That Goes Wrong

We are in search of eight actors (6 male/2 female), in their 20s or 40s, who can deliver hilarious, fast-paced dialogue, and who are able to do demanding physical comedy, for this wildly funny British comedy. Performances are October 6–9 & 13–16, 2022.

There are two ways to audition:

1. In-Person Auditions: Saturday, June 18 at 6 p.m.
You may either bring a monologue or read one which we will provide. You may also be asked to read selected scenes with other actors. If you can do an English accent, please let us hear it! (If you cannot make this date, let us know and we will try to setup another date/time.)
Please bring your calendar so you can provide any scheduled conflicts on the audition form.

2. Video Auditions are encouraged, and can be sent to Bill Ivins at ivinsinkstudio@gmail.com, or via Messenger on Facebook. Video auditions are due by June 18.

PLEASE INCLUDE the following info:
• Name, Age
• Contact Info
• Preferred Role (see below for descriptions)
• 60 second monologue (a British accent is preferred.)
(If you don’t have a monologue, just tell a story!)

Welcome to opening night of the Cornley University Drama Society’s newest production, The Murder at Haversham Manor, where things are quickly going from bad to utterly disastrous. This 1920s whodunit has everything you never wanted in a show—an unconscious leading lady, a corpse that can’t play dead, and actors who trip over everything (including their lines). Nevertheless, the accident-prone thespians battle against all odds to make it through to their final curtain call, with hilarious consequences! Part Monty Python, part Sherlock Holmes, this Olivier Award–winning comedy is a global phenomenon that’s guaranteed to leave you aching with laughter!

Rehearsals and Performances:
• Read-through will be scheduled once the show is cast, but it is likely sometime in mid-July.
• First rehearsals tentatively scheduled to begin the first week of August at 7 p.m.
• Rehearsals will be held weekday evenings (7–9 p.m.) with some Saturdays (Noon–3).
The rehearsal schedule will be determined based on actor’s availability. Rehearsals will be at the Playhouse, unless notified.
• There are EIGHT performances; October 6–9 & 13–16, at 7:30 p.m. and Sundays at 2:30 p.m.

Sponsor a show your family loves – or one that matches your company’s values.
END_OF_DOCUMENT_TOKEN_TO_BE_REPLACED